PETER BAREN * 1954  The Netherlands, lives in Amsterdam and works on performances and other presentations.

He studied painting at the Rijksakademie van beeldende kunsten in Amsterdam from 1972 to 1977. Since his first public performance in 1980 his work has been shown frequently in the Netherlands and from the mid-eighties on an international level.

Baren’s work is often collaborative; other artists he has worked with at an early stage include a.o. Stuart Sherman- performance artist, Koos Dalstra / Dalstar- criminologist and poet, Truus Bronkhorst- dancer and choreographer.

In 1989 he was one of the recipients of the PRIX DE ROME Art & Theatre.

Baren’s multimedia practice includes site-specific public performances which he refered to as ’temporary explorations’. He uses video both for documenting these performances and to create works which are more medium-specific examinations revolving around the history of mankind, cultural objects and territories.

Many of Baren’s pieces revolve around the notion of ritual and the way it functions in various socio-cultural contexts. This is conveyed in his art through the use of concepts of otherness and ancient cultures in works that also employ ‘body art’ techniques although in minimalist settings constructed with historical props.

The monography PETER BAREN  BLIND DATES WITH THE HISTORY OF MANKIND  PERFORMANCES 1980- 2013, was launched during STAGE IT! Presentations on performance art at Stedelijk Museum Amsterdam in May 2014.

Please go to PORTFOLIO 2023 – 1979 Resume for more specific information on performances and other presentations – also you will find the full content of the monography.

The ongoing performance series BLIND DATES WITH THE HISTORY OF MANKIND, as a multi-sensory work, searches for a common ground between sensual bewilderment and operational suffering, challenging the constructed nature of our ideas on progress and memory, derived from our social, cultural circumstances and territories. BLIND DATES WITH THE HISTORY OF MANKIND [NO REQUIEM]
Performance together with Imke Zeinstra. Project ID. In Between Identities. The Hague 2019.
Photo: Jacques Martens WE THE BLIND PEOPLE? PEACE WILL COME TO ME!
Circular walks during ART ROTTERDAM 2017
Photos: Mariana Lanari
From the series BLIND DATES WITH THE HISTORY OF MANKIND 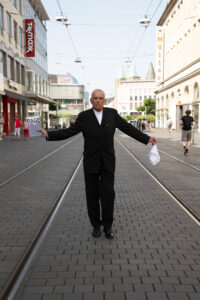