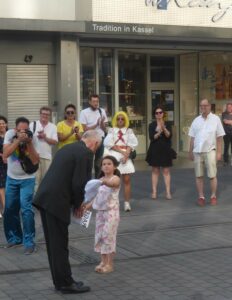 Massive in scale and retrospective by nature, What Remains: On the Sacred, the Lost, and the Forgotten Relics of Live Art is the first exhibition of Defibrillator Gallery’s 10th anniversary year. Curated by Netherlands-based ieke Trinks, this visual art exhibition and performance art series features a cohort of artists from around the world who responded to reanimate Defibrillator’s collection of objects from performances that took place over the past nine years by Joseph Ravens, director of Defibrillator Gallery.

PROJECT: STILL WAITING/NO REQUIEM
For Baren STILL WAITING/NO REQUIEM is an outstanding occasion to be able to transfer this project [THE PACK OF TING work title] that never saw the light of day yet, onto Marilyn Arsem’s table and chair that she used in her performance during 2015 edition of Rapid Pulse including the 4 dry flowers.

Studies were texted and drawn in white onto burned surfaces in situ of both table and chair, hanging down from the ceiling. They include make overs of pieces by Magdalena Abakanowicz, Gerrit van Bakel, Joseph Beuys, Martin Disler and Kiki Smith.

Eventually to bring them together in full scale with short and durational PB performances, to be executed on a later date…

BLIND DATES WITH THE HISTORY OF MANKIND [NO REQUIEM / PROGRESS PROGRESS STRANDED] 2019
Project ID In Between Identities. The Hague 2019.
Performance together with Imke Zeinstra. Camera and edit: Jolanda Jansen 3.32 mins. color, sound PLAY IT LOUD. Online since 7 September 2020.

Recent screenings of the video above during:

On Friendship / (Collateral Damage) II – The Guardians of the Door.
Reflection on Kazimir Malevich:   The naked square EIRUV ChaTzeROT (Almagamation of Courts). PB participation with several performances in this durational project by Joseph Sassoon Semah

On Friendship/ (Collateral Damage) II – The Guardians of the Door. Reflection on Joseph Beuys: how to explain hare hunting to a dead German artist.

On Friendship / (Collateral Damage) II – The Guardians of the Door.
Around The New Church, Dam Square, Amsterdam Maarten Luther and 500 years of Reformation are the central subject: with art, performances, artistic interventions, round-table conversations, lectures and a book publication. There will be critical reflection on the image of Luther as a ‘superstar’ and on his importance then and now. De Nieuwe Kerk, Jewish Historical Museum, Stedelijk Museum and Goethe Institute are all  partners in this project.

The starting point was Joseph Sassoon Semah’s nailing his answer to Luther on the door of The New Church, preceeded  by a procession coming from Dam square. 22 June. Metropool International Projects 2017.

On Friendship / (Collateral Damage) II – The Guardians of the Door.
The New Church and Dam Square. Participation in durational project by Joseph Sassoon Semah. On the 13th of July 2017, Joseph Sassoon Semah pursued the case with a public intervention towards installation in De Nieuwe Kerk, Amsterdam. Among the sound of the sewing machines, the bicycle, the procession, the music of Johann Sebastian Bach, the mute Hare, the silence of the chess players, and the sacred dispute between Lutheran pastor Dr. Andreas H. Wöhle and Joseph Sassoon Semah, one could  hear my reading through a megaphone, from the book “On the Jews and Their Lies”; an anti-semitic treatise written in 1543 by the German Reformation leader, Dr. Maarten Luther. [Peter Baren performance]

BLIND DATES WITH THE HISTORY OF MANKIND  [RAGE AND TIME] 2017. 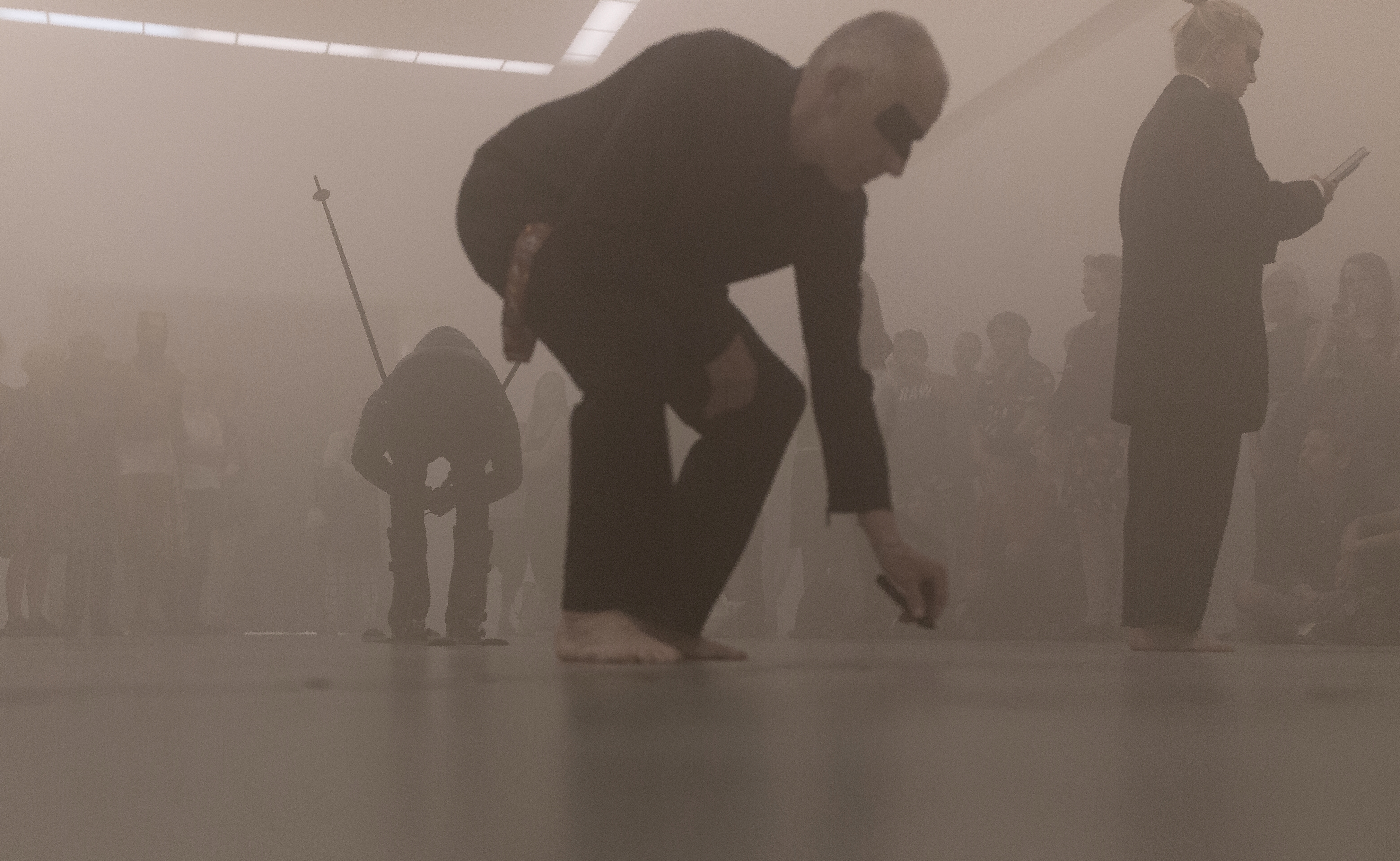 BLIND DATE WITH MICHAEL GIBBS [SECRET IT IS]

SCORE:
The performance lingers amongst the exhibited work from the estate of Michael Gibbs.
At first two pieces are taken down from the wall. A carrousel slide projector is set in motion directed towards the empty spot. I step into the projected light and it shows ALL on my back [the next slide shows WITHOUT… when stepping out of the light]. Walking towards the exhibited box with cut out book. Every time when standing opposite a chosen work, I open the book, hold it up in front of me and close my eyes for a short period of time. The excerpt that follows is voiced by Michael Gibbs.

The whole of the trajectory also includes a communion dress, used by Gibbs as part of an installation, and brought in especially for this performance. After several stops I stand in front of Cancelled Letters, the book is opened, again close my eyes, pull out a white handkerchief fromthe chestpocket and stretch my right arm, hold the handkerchief for a short period of time and let it fall on the floor. Right after this action the book is returned into the box.

The ending of the performance takes shape when I slowly walk backwards next to the long showcase. One by one 3 boomerangs are picked up from the glasspanel and pressed against my forehead. They read: EXTINCTION, MIND and on top OPEN. Walking backwards and stop close to the fallen handkerchief, I kneel and the boomerangs are laid down around it. Last position is carried out from behind the communion dress, lift it and stand motionless inside.
Michael Gibbs voices SECRET IT IS Performance and video produced for the occasion of SAME DIFFERENCE: Equinox To Equinox 22 September: Day of Public Actions for Freedom and Democracy

Initiated by BBEYOND, Belfast. Every year on 22 March and 22 September groups of performers worldwide celebrate this day. The 2016 film compilation of the event is shown on various locations during this Day.

BLIND DATES WITH THE HISTORY OF MANKIND [RAGE AND TIME] 2015  Live performances around Ledeberghplein, Gent, Belgium The link below offers only the interview between Alex de Vries and Peter Baren, Dutch spoken. Duration 22.48 mins.
https://www.youtube.com/watch?v=Y9H_cCeaqVs 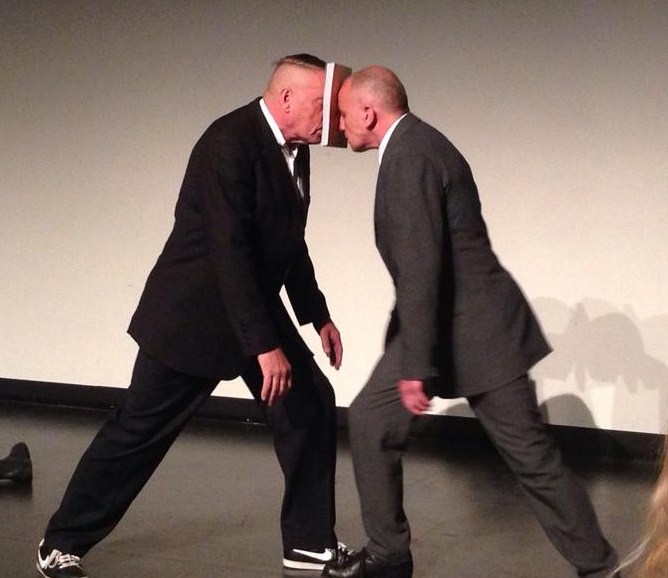 Presentation of the first copy

In the middle of crossroad La Canebiere / Rue de la Grande Armee I slowly rotate with handwritten leaflets that are alternated [in different languages], showing it to people passing. Interrupted by police after 9 minutes. Video: Louis Alesandrini. The footage was derived from ARK (ON HOPE AND OTHER TERMINAL BODIES SUCH AS BRIDGE OF SIGHS, SLEEP OF REASON AND WAILING WALL)

Each day the performance starts in the Center of Contemporary Art / Upper Gallery and consequently the space is left to proceed in a processioned walk to several sites in the city of Tel Aviv where assassinations took place in the past. (except for Day 1]

Day 1: The gallery is foggy and bangs are heard at irregular intervals. People who enter are faced with a figure, its eyes blacked out (censor bar) holding up a jigsaw puzzle (showing two soldiers carrying a youngster away from a colonist settlement). In the middle of the space (standing in between a long and oval floor text by Mao Tse-tung, from 1938) two figures may be descried: heads covered in scarves, their bodies covered with molasses and wrapped together with cling film, their arms outstretched, with mobiles hanging down from their fingers. People gather around the floortext. The first figure takes the jigsaw puzzle apart and puts the pieces down on the floor around the floortext.

Next, all around the surrounding walls the word HARAM is written (in reverse – meaning unclean, impure), to declare everything that finds itself outside this space unclean, impure. In between those words one can read HOPE  in many different languages. The first figure shuffles and stops in front of every word [HOPE] and whispers it in that particular language.
This action is followed by the first figure picking up boomerangs one by one, then subsequently SPIRIT, MEATJOY, SHOOT, EARTHLING, CROSSFIRE is written on each of them and they are lined up right behind the figures. The last action consists of the first figure tearing his shirt, while facing the two clinched figures. Doors are opened to lead people out.

On the following three days people who enter the CCA are then faced with a blow-up of the image used previously, which  is then torn up and scattered around the floor text (again and again). The jigsaw pieces used in the first performance are left in the space. The line of words is (repeatedly) being licked before the single figure is taken out of the space into the city of Tel Aviv, to sites where assassinations took place in the past.

Every walk ends with the first figure tearing his shirt after facing the other figure, in the vicinity of one of these sites and leading it back to the CCA. During the last trip (to the seaside) a boomerang is thrown towards the sea with the word SPIRIT written on it. PB 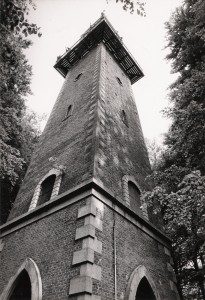 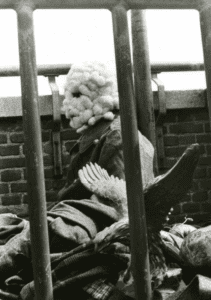